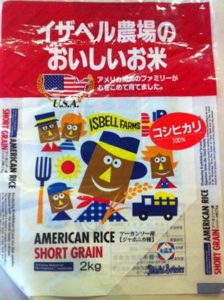 In the early 1990’s – long before sushi became popular in the United States – Chris Isbell began producing Japan’s most prized sushi rice here in the United States. Before being produced here on Isbell Farms, it was a belief of almost legendary degree that Koshihikari could not be produced outside of Japan. When it was successfully produced here on Isbell Farms, the media outlets in Japan took great interest. Over the coming years, dozens of Japanese media crews descended on Isbell Farms, including every major national television station and newspaper. In subsequent years, Isbell farms would become the destination of multiple Japanese tour groups.

Over the years Isbell’s Koshihikari would be marketed throughout the United States and, in the mid 1990’s, in Japan, where it sold out shortly after being distributed to stores.

In more recent years, U.S. production of sushi rice has moved to the west coast where there is a significant shipping advantage to high-use markets. Isbell Farms remains focused on this important market and continually assesses potential opportunities in this space.

Among the enduring benefits of this experience are the continued relationships built with Japanese companies here in the U.S. and in Japan as well as lasting friendships.

You can read more about our experience with the production of Japanese Rice here.